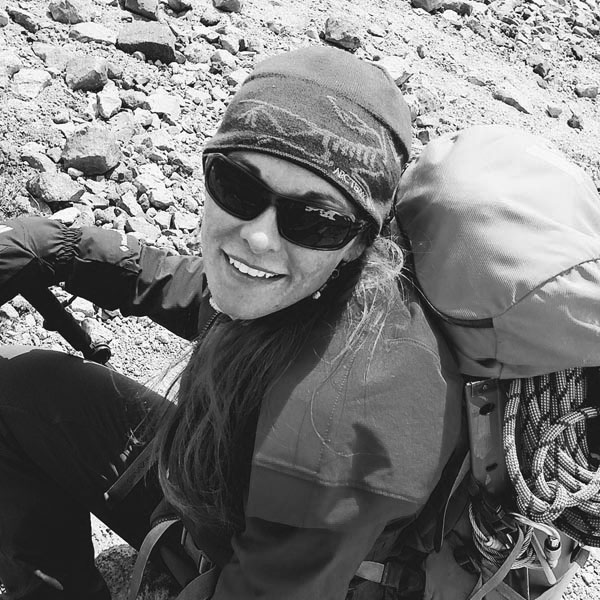 My husband is a mountain guide and a business owner, John Minier of Baker Mountain Guides to be exact. He typically works weekends and every hour of every day when he is home. I work a normal 9-5 Monday-Friday job. We rarely have the same days off. So when the opportunity presented itself for both of us to have two consecutive days off in a row, we jumped on it, even though John had just come off a trip that previous night and was exhausted. This is how most stories that don’t have the fairy tale ending start.

The Twin Sisters Range has long held a soft spot in my heart. Close to home, virtually devoid of humans, and largely wild and untamed. For several years now, we have been venturing into this area. This year we wanted to try to complete a traverse of the Green Creek Glacier, linking up multiple peaks along the way. It’s not a hard or long traverse. It can be done in less than two days, presuming you have the right weather.

Our favorite way to access the area is via the Elbow Lake Trail from the Middle Fork of the Nooksack. At only 45 minutes from our door, it’s the closest access for these kinds of adventures, plus you get an AWESOME bushwhack through neck deep, unbelievably dense blueberry bushes. As the crow flies the bushwhack is a mile or less, but it sure does feel a lot longer when all you can see is the blueberry branch in front of you, hour after hour. What keeps you going is the occasional view of the valley ahead. 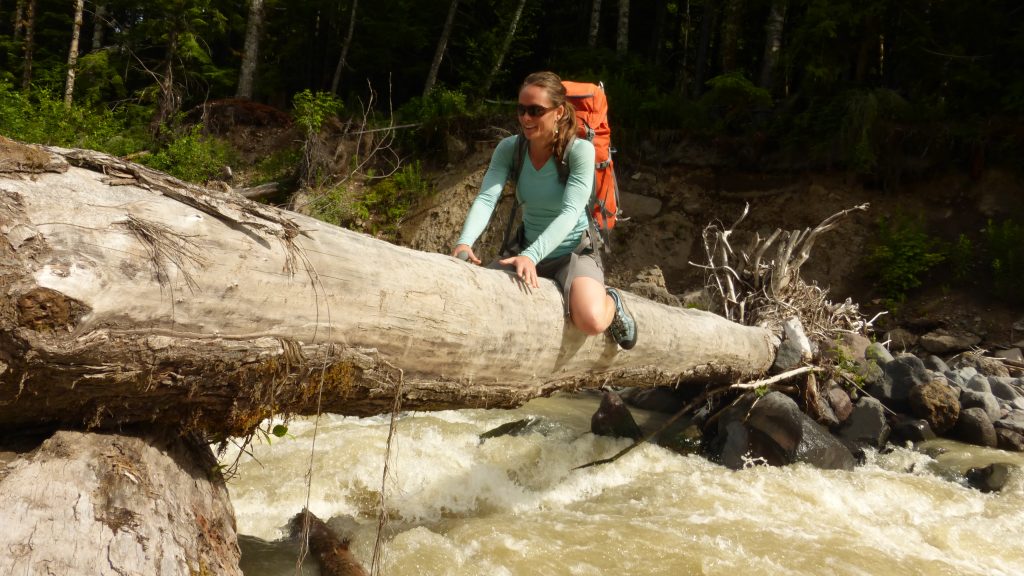 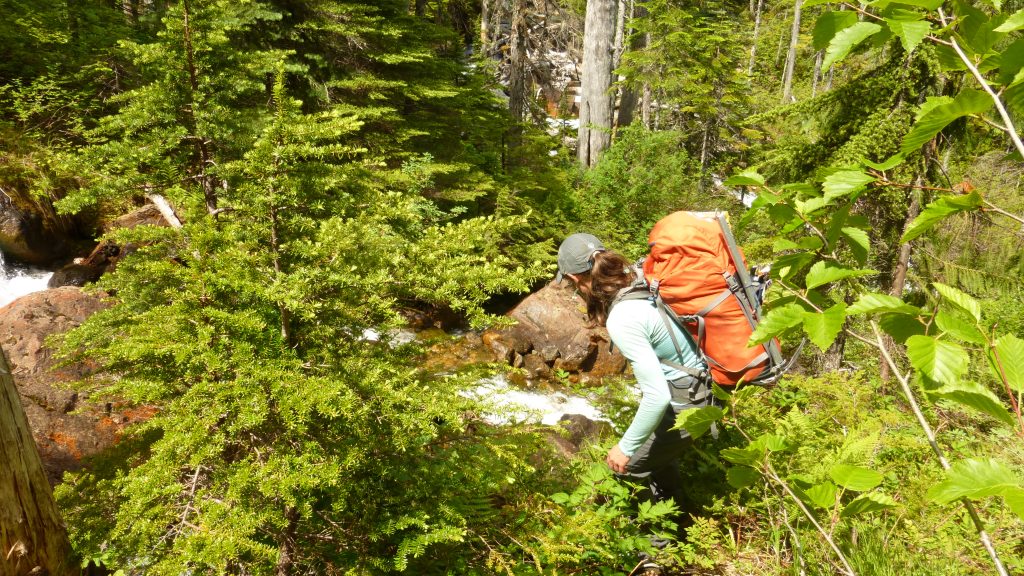 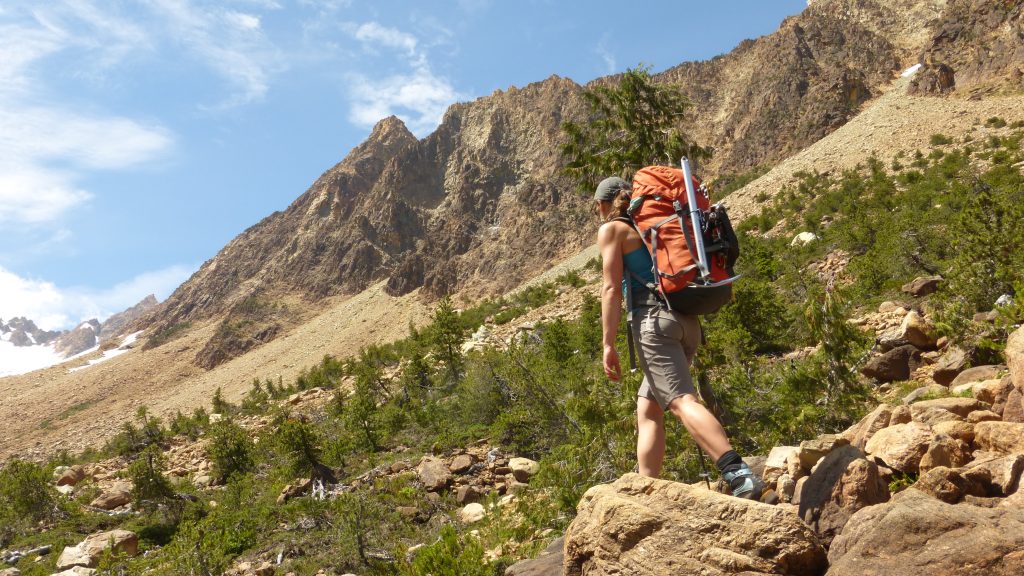 We got a late start, were on the trail around 11am, and at the base of the Green Creek Arête around 130pm. After some excellent scrambling and low 5th class climbing up the Arête, we topped out, pleased to find that the loose talus that dominates the area was still covered in snow. Both John and I were also grateful that some afternoon clouds had moved in and cooled the solar cooker that we were currently walking through. However, the clouds quickly turned into more than just shade. By the time we reached the base of the South Twin it was raining, not hard per se, but constant. We continued up the South Twin Sister in the rain, through some of the most fun scrambling I’ve done in the range yet. We topped out around 630pm, hoping to bivy on the summit. The view to the west was a black wall of water. Thanks NOAA. 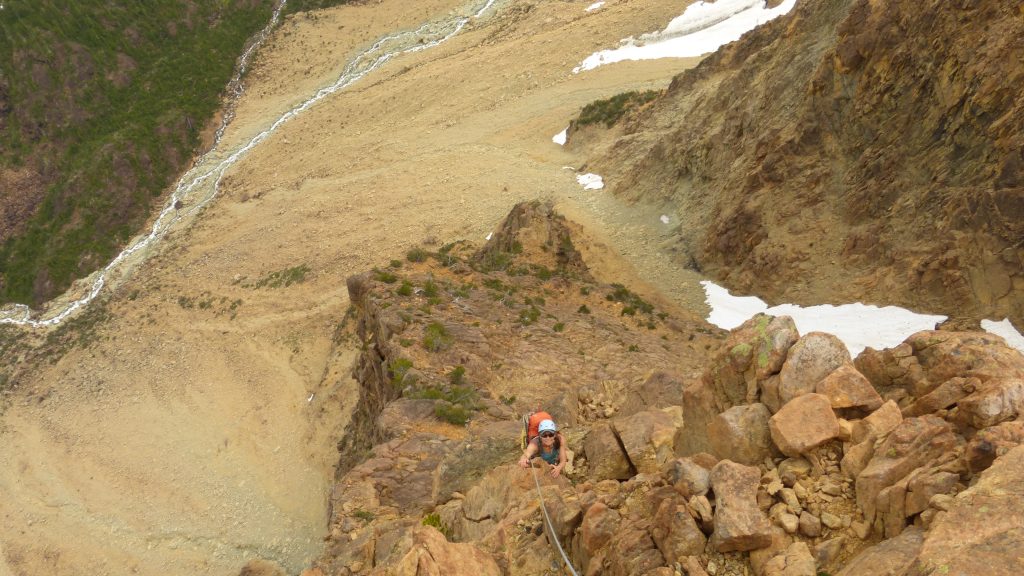 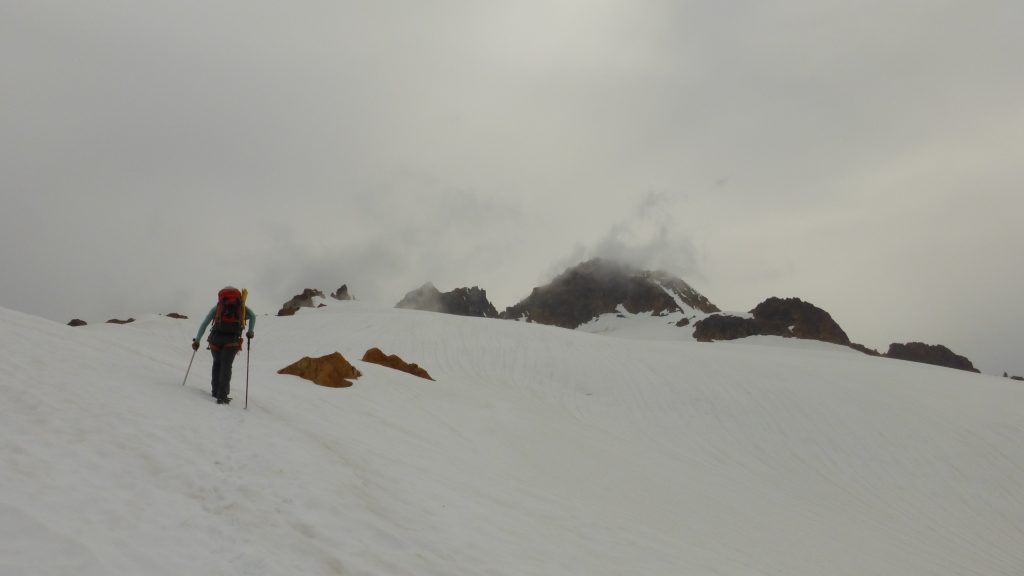 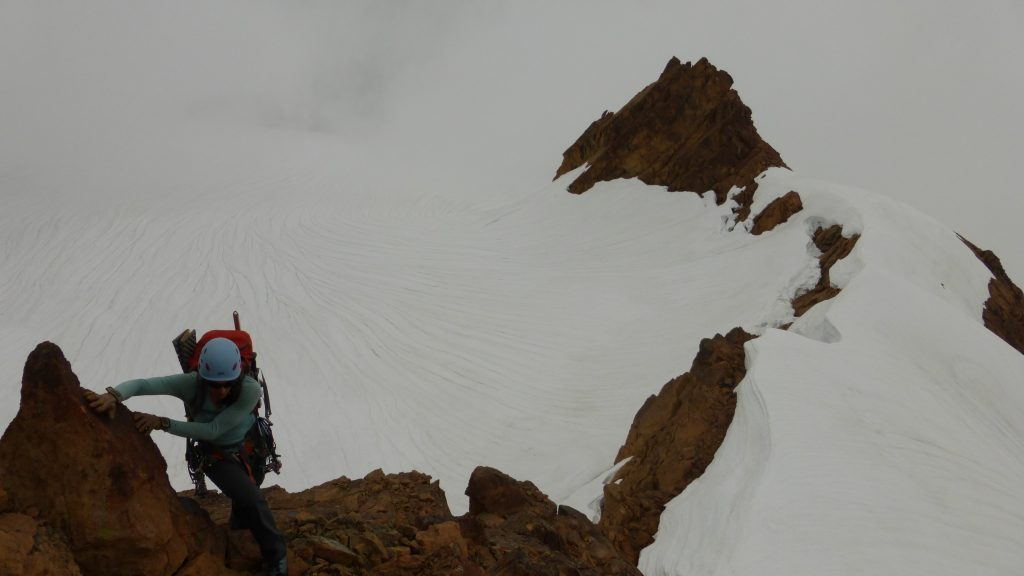 For those of you who live in the Pacific Northwest, this is a more common experience than one would like. NOAA will call for clear sunny skies and what you’ll actually get is rain. That’s all well and good if you have the right gear for it. We however did not. We had planned on going fast and light. We were going to sleep under the stars sans tent or hardshell jackets, and in my case my NeoAir sleeping pad.

We poked around the summit of the South Twin Sister for a few minutes and pondered just going for it. If we kept moving, we could be over Jaw’s Tooth and Skookum before dark and we could just keep going until the storm (hopefully) passed. As John so keenly stated though, do you take the devil you know or the devil you don’t? The devil we knew involved scrambling back down the South Twin Sister, and rappelling and scrambling down the Green Creek Arête…on wet rock. Then there was the walk down the Field of Dreams – a 1000 vertical foot talus slope sometimes covered in sand and dirt. It’s a total disaster as far as walking is concerned. Many a people have lost some skin here. None of the rocks actually fit together, so pretty much everything you step on moves, no matter what size the rock. I’ve spent a lot of time on the Field of Dreams from my other trips into the range, so I have a sort of kindred relationship with the hellish slope. We chose the devil we knew.

We debated pushing out to the car that night. It was already after 9pm and we still had some awesome bushwhacking to do. Instead, we opted to camp in the basin at what I lovingly call “The Spa.” I’d been there before on a previous altered mission and luckily was able to find it again. It’s this nice camp spot in the bottom of the basin with two springs of fresh running water, and awesome sandy bivy spots amongst huge boulders. One of them was overhanging just enough to protect us from the rain. Unfortunately I had chosen not to bring my NeoAir sleeping pad. John, being the gentleman that he is offered me his. However, being the stubborn woman I am, I declined, purporting that I needed to learn my lesson.

We woke up early (John well rested and me exhausted from a rough night on the dirt) and stopped at the Refugio for a scone and coffee. We were home by 1030am. John and I were both a bit disheartened because the weather that morning was perfect, and we have very much wanted to complete the traverse. Sometimes in those moments when you make the choice to turn around you forget the awesome journey that brought you to where you were. We had perfect weather the entire way in and made it to the top of the South Twin Sister, which neither of us had done before. We had a wonderful night out in one of the most beautiful basins in the area and we made it out safely. We ended up grateful for the experience despite not being able to complete the objective. For us, everything is a work-life balance, and the balance is tricky. The scale seems to tip to the work side more often than not. We ended up with the best of both worlds this weekend. We got home early and were able to spend the evening on the river with our pup Tatlow playing fetch and chasing bunny rabbits!

And besides, if we have completed the entire traverse, what would we do next year?