Reflections from the Rope Line 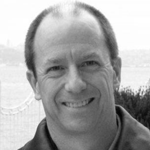 Greg Morgan climbed Mt. Baker as a guest with Baker Mountain Guides. He has written a thoughtful account of his experience on his personal blog, and graciously permitted us to share and re-post his words here. To read more of Greg’s writings, please visit his Blog: Midlife Sabbatical

One of my great delights this summer has been a climb of Mount Baker (10,781’) in northwest Washington, a mountain that one guide book describes as “pound for pound, the iciest of the Cascade volcanoes.” My climb was blessed by fabulous companions, expert guides, and perfect weather, and it left me with wonderful memories that will be food for joyful reflection for years to come.

The journey from base camp (around 6,000’) to the summit is really just a long walk, requiring no rock-climbing skills. The catch, of course, is that the route is over snow and ice virtually all the way, in places quite steep, and much of it over the top of an active glacier. The use of an ice ax and crampons (snow spikes attached to one’s boots) are essential, and we were roped together in teams of four for the entire duration (except for on the broad, flat summit). A few interesting reflections rose for me as I climbed and descended this mountain in unison with the three other companions on my rope line.

The chief purpose of the rope line was captured perfectly in the book of Ecclesiastes more than 2000 years ago: “Two are better than one, for their partnership yields this advantage: if one falls, the other can help his companion up again” (Eccl. 4:10). And four are better than two, for if one falls there are three to help. We had all practiced self-arrest techniques the previous day, in which the ice ax is used to stop a slide on steep snow. But one’s confidence is increased immeasurably by knowing that others are there to help break any such fall and help out as needed. It is much easier to attempt new goals that feel risky when one is surrounded by community.

For much of the climb we were “on the long rope,” separated from each other by thirty feet or so (as pictured above). Most of the rope between any two climbers should glide along the surface of the snow in a straight line, with no excess slack. Each climber should be able to move fairly independently, but the rope should become taut immediately in the event anything unexpected happens. This tension is never maintained perfectly, but we were taught the motto “better to be a jerk than a slacker.” The lesson I take from this: when living in a community, maintaining space and boundaries are important, but it’s better to be in a little too frequent contact than to drift apart and lose touch.

During one long, easy part of the descent, I was in the lead position on the second rope. My companion Bruce was in the back position on the first rope, close enough to begin a conversation. We drew closer to each other to be able to speak more easily, but the guide on my rope called out “Greg, maintain the same distance from Bruce as we are keeping between those of us on this rope.” I replied, “Will do, but I am curious as to why.” He replied, “This is an active glacier, and one can never tell for sure when one might be walking on a snow bridge over a crevasse. We never want two people walking over a snow bridge at the same time – it increases the risk of a bridge failing, as well as the consequences.” Clearly, sometimes there are more reasons than we realize for maintaining healthy spacing between us!

Still, there are also times for pulling together more closely, and in climbing this is called “short roping.” In this technique, the climbers have only about eight feet between them, and the goal, in the words of our guide, is to “behave as a single organism.” The rope has little slack, so that any slip can be stopped quickly. We used this technique when climbing “the Roman Wall,” a slope of snow that increases from a 20% grade to 40% in the course of ascending 800 vertical feet. We moved with synchronized steps, each climber utilizing the prints of the person just ahead to ensure good footing. We found a pace that we could all sustain comfortably, and then we ascended steadily—as one organism.

One climbing site opined that the chief advantage of this method is psychological: “Short-roping greatly increases the climbers’ confidence. As a result they are more relaxed and concentrate better on secure footing, thus greatly reducing the probability that they fall.” This accurately described my own experience, especially during the more challenging descent of the Roman Wall, where I was in the lead—the comforting, encouraging chatter from my rope-mates right behind me really settled my nerves and helped me focus on placing my feet and ice ax. The immediate tug of the rope I felt on the one or two occasions where I slipped a bit reminded me of the extra security my companions were providing me and further enabled me to be a better climber. As one living, breathing, communicating, moving organism, we descended safely down the steepest pitches of the wall and back to easier terrain.

Life on the short rope, or any rope—literal or figurative—can only be sustained comfortably for so long. We all instinctively desire independence in our movements and actions, so it felt good to move back to the long rope after completing the steepest part of the descent, and even better to shed the ropes completely once we got off the snow. We also feel best living in a place with sufficient security that such protective measures aren’t generally necessary, so, as always, I began to breathe a little more easily once I returned to the comforts of civilization.

Knowing how many people in the world today live without the basic security I enjoy, I recognize what a luxury it is to be able to undertake such adventures voluntarily. But I am nonetheless grateful for the opportunity this climb provided me to experience living in close community in an entirely different way. And I don’t need to stay tied in to a rope line in order to try to apply these lessons to living in community every day.