Not all avalanches are the same. This post teaches you about the nine different Avalanche Problems you could encounter any given day while out in the backcountry. To get the most out of this post, you should first have a basic understanding of the North American Avalanche Danger Scale.

Avalanche Problems are defined by four major elements, the Avalanche Character, Location the avalanche can be found in terrain, the Likelihood of triggering, and the Size (how big it will be). 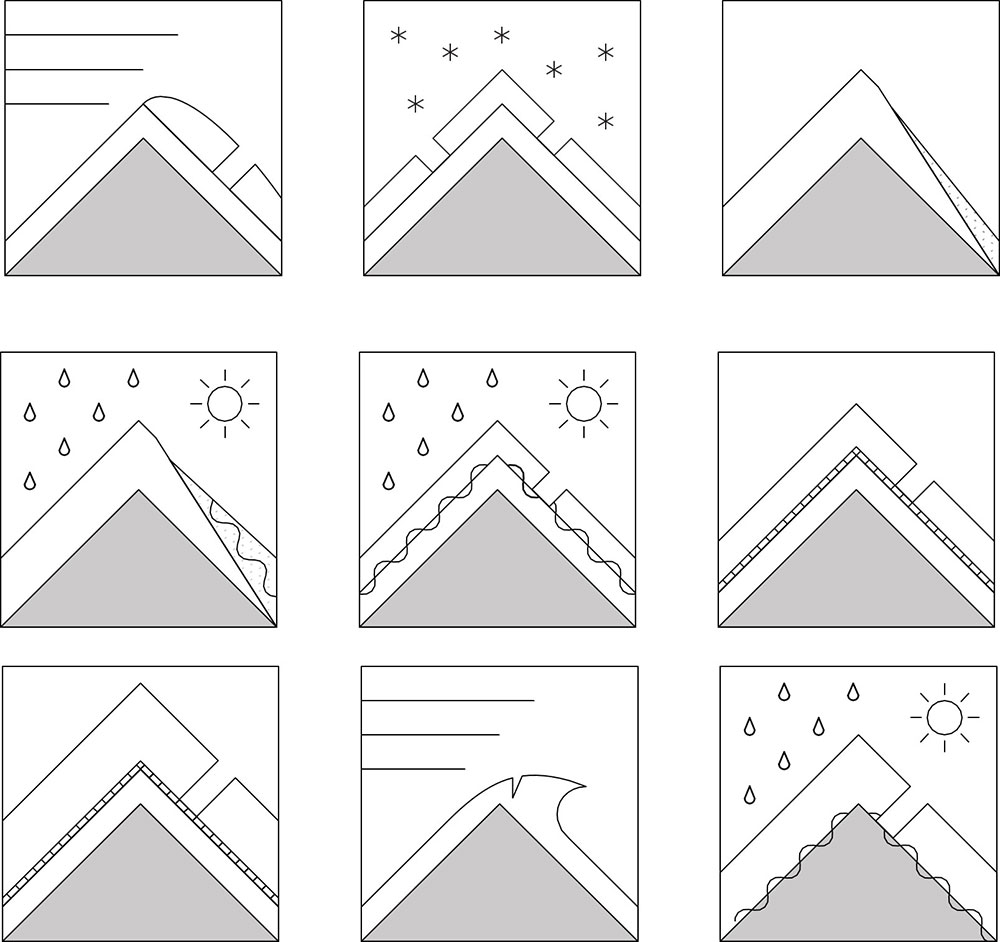 Dry Loose avalanches are the release of dry unconsolidated snow and typically occur within layers of soft snow near the surface of the snowpack. These avalanches start at a point and entrain snow as they move downhill, forming a fan-shaped avalanche. Other names for loose dry avalanches include point-release avalanches or sluffs.

Wet Loose avalanches are the release of wet unconsolidated snow or slush. These avalanches typically occur within layers of wet snow near the surface of the snowpack, but they may gouge into lower snowpack layers. Like Loose Dry Avalanches, they start at a point and entrain snow as they move downhill, forming a fan-shaped avalanche. Other names for loose-wet avalanches include point-release avalanches or sluffs. Loose Wet avalanches can trigger slab avalanches that break into deeper snow layers.

Wind Slab avalanches are the release of a cohesive layer of snow (a slab) formed by the wind. The wind typically transports snow from the upwind sides of terrain features and deposits snow on the downwind side. Often, wind slabs are smooth and rounded and sometimes sound hollow. They can range from soft to hard. Wind slabs that form over a persistent weak layer (surface hoar, depth hoar, or near-surface facets) may be termed Persistent Slabs or may develop into Persistent Slabs.

Storm Slab avalanches are the release of a cohesive slab of new snow that breaks within new snow or on the old snow surface. They typically last between a few hours and a few days (following snowfall). Storm-slabs that form over a persistent weak layer (surface hoar, depth hoar, or near-surface facets) may be termed Persistent Slabs or may develop into Persistent Slabs.

Persistent Slab avalanches are the release of a slab in the middle to upper snowpack when the bond to an underlying persistent weak layer breaks. Common persistent layers include surface hoar, depth hoar, near-surface facets, or faceted snow. These layers can continue to produce avalanches for days, weeks or even months, making them especially dangerous and tricky. As additional snow and wind events build a thicker slab on top of the persistent weak layer, this avalanche problem may develop into a Deep Persistent Slab. 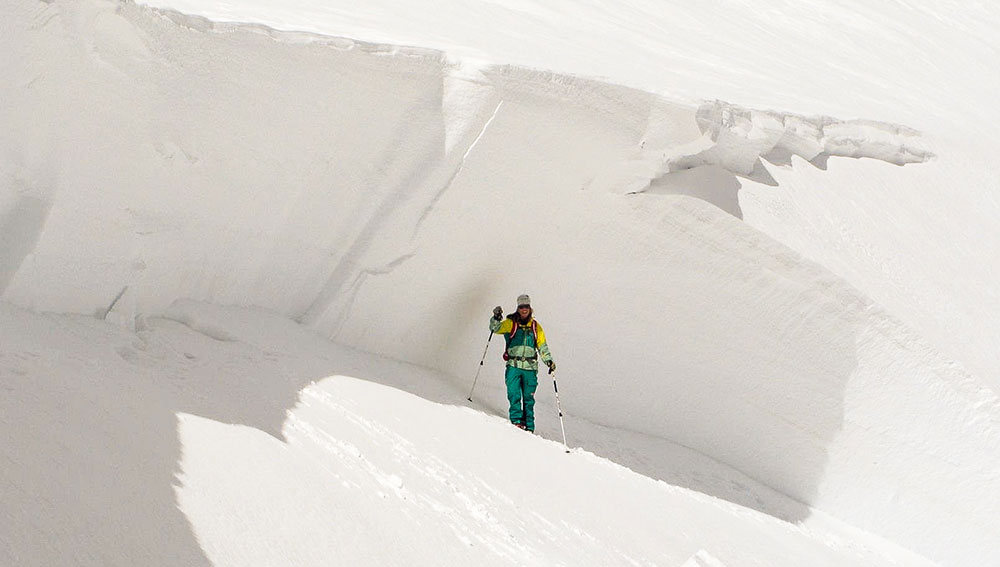 Take Note: The main difference between a persistent slab and deep persistent slab is depth. Deep Slabs break on a layer over a meter down in the snowpack. Because of the difficulty in triggering and larger consequence of a deep slab, they are broken out as separate problems.

Wet Slab avalanches are the release of a slab that is generally moist or wet. They occur when the flow of liquid water weakens the bond between the slab and the surface below. They often occur during prolonged warming events and/or rain-on-snow events. Wet Slabs can be very unpredictable and destructive.

Glide Avalanches are the release of the entire snow cover as a result of gliding over the ground. They can be composed of wet, moist, or almost entirely dry snow. Typically, they occur in very specific paths, where the slope is steep enough and the ground surface is relatively smooth. They are often preceded by glide cracks (“the brown frown”). The time between the appearance of a glide crack and an avalanche can vary between seconds and months. Glide avalanches are unlikely to be triggered by a person, so they are nearly impossible to forecast. Consequently, they pose a hazard that is extremely difficult to manage.

Cornice Fall is the release of an overhanging mass of snow. Cornices form as the wind moves snow over a sharp terrain feature (like a ridge) and deposits snow on the downwind (leeward) side. They range in size from small wind drifts of soft snow to large overhangs of hard snow that are 30 feet (10 meters) or taller, and can break off the terrain suddenly. Often, they pull back onto the ridge top and catch people by surprise even on the flat ground above the slope. Even small cornices can have enough mass to be destructive and deadly. Cornice Fall can entrain loose surface snow or trigger slab avalanches. 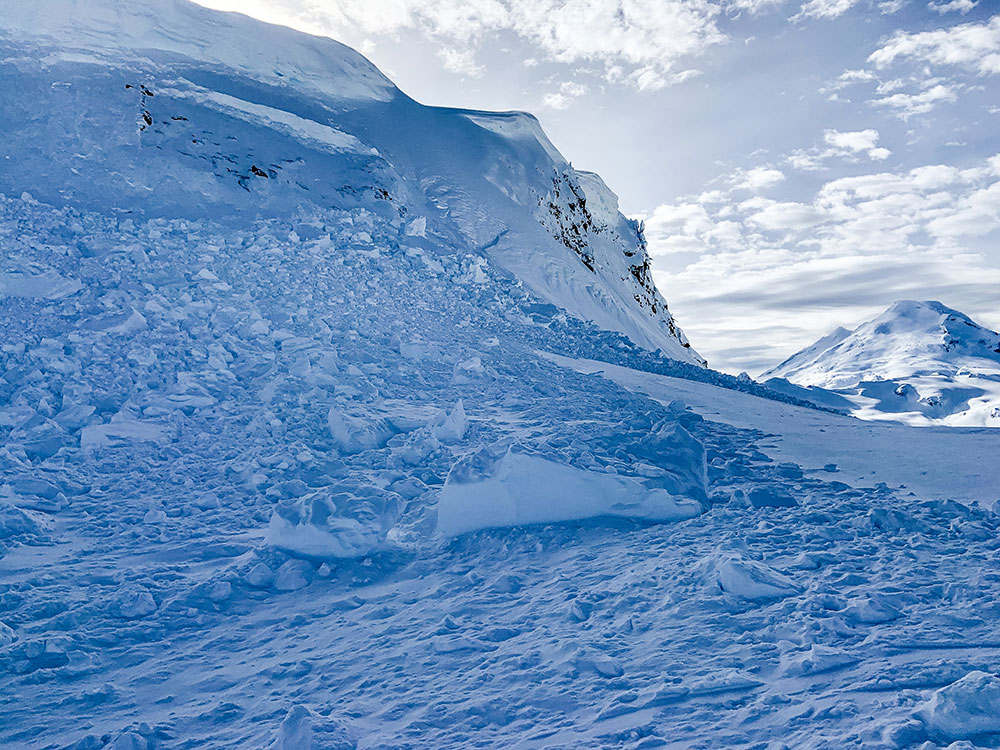 Where avalanches can be found is broken out into three elevation bands: Below Tree Line, Near Treeline, or Above Treeline. From there, it can get more specific as Aspects (N-S-E-W) can also be conveyed.

Below Treeline (BTL) is the elevation band of a mountain or range that is covered by forest. From its upper to lower limits, it often covers the greatest area and the greatest variation in snowpack conditions of any elevation band. These areas usually see less sun, wind, cold, and precipitation than higher elevation bands. 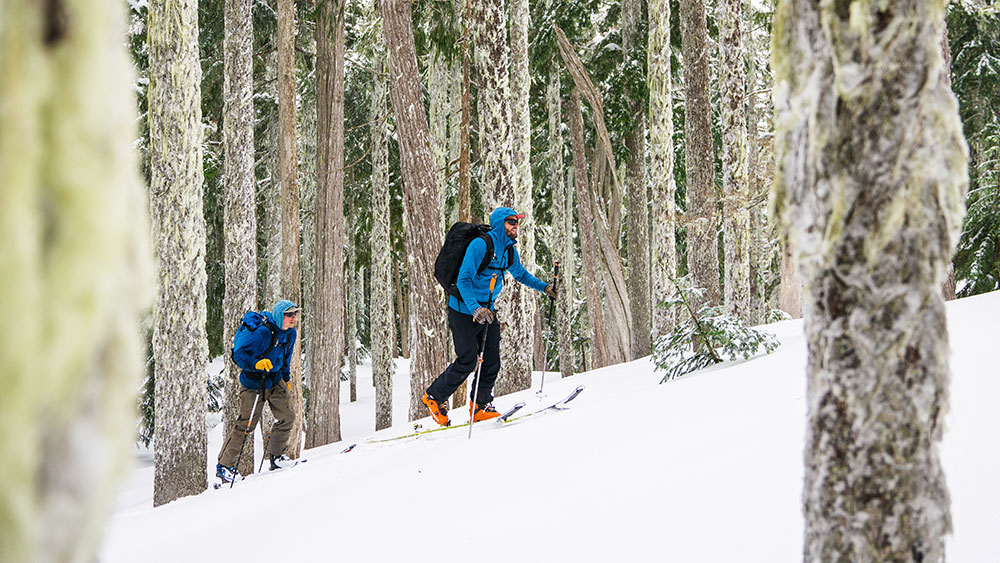 Near Treeline (NTL) elevation is characterized by sparse forest cover and is the transition between uniform forest cover below it and the alpine above it. These areas are distinct for sharing features of both alpine and below treeline elevations. Exposure to sun, wind, cold, and precipitation is generally less here than in the alpine but greater than below treeline. 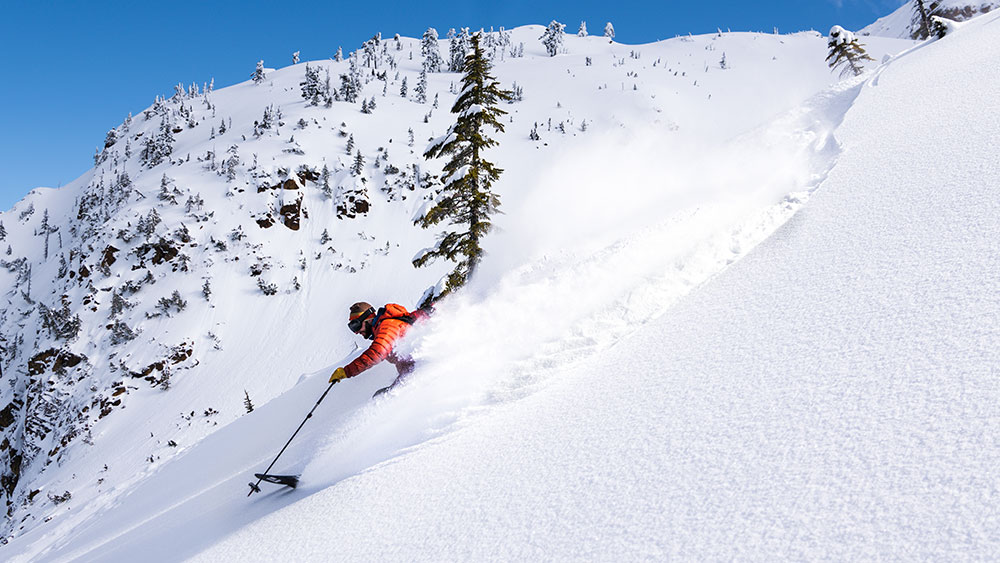 Above Treeline (ATL) consists of wide expanses of open, exposed terrain with few or no trees. Where it exists, it is the highest elevation band of a mountain or range. Not all mountains have above treeline terrain, but it may be the dominant terrain in other mountains or ranges. This elevation is usually the most exposed to sun, wind, cold, and precipitation. 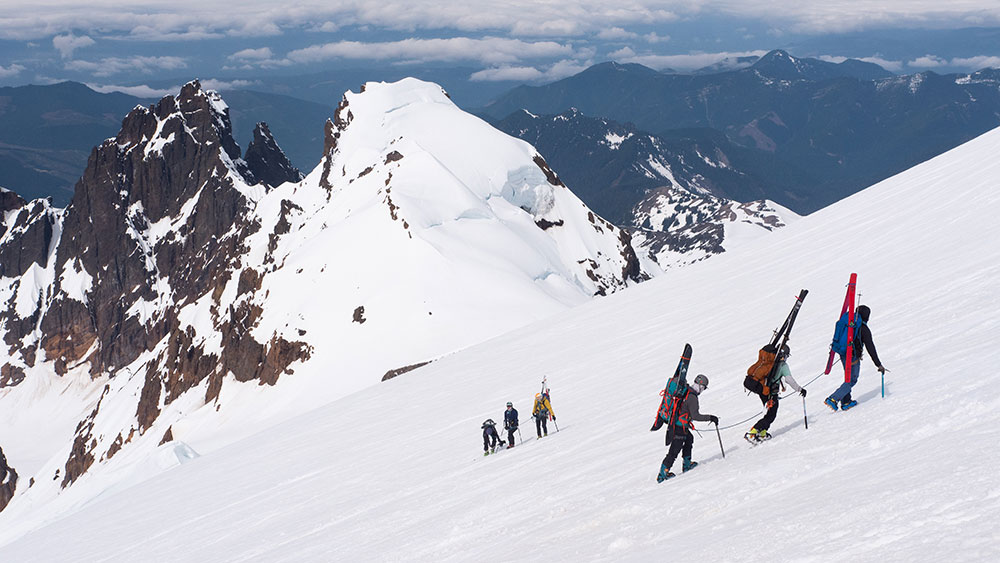 Likelihood is a description of the chance of encountering a particular Avalanche Problem. It combines the spatial distribution of the Problem and the sensitivity or ease of triggering an avalanche. The spatial distribution indicates how likely you are to encounter the Problem in the highlighted avalanche terrain. The sensitivity indicates how easy it is to trigger avalanches including both natural and human triggered avalanches.

Likelihood is broken down into five categories with Unlikely at the bottom and Almost Certain at the top. In between is Possible, Likely, and Very Likely. Photo below by Grant Gunderson. 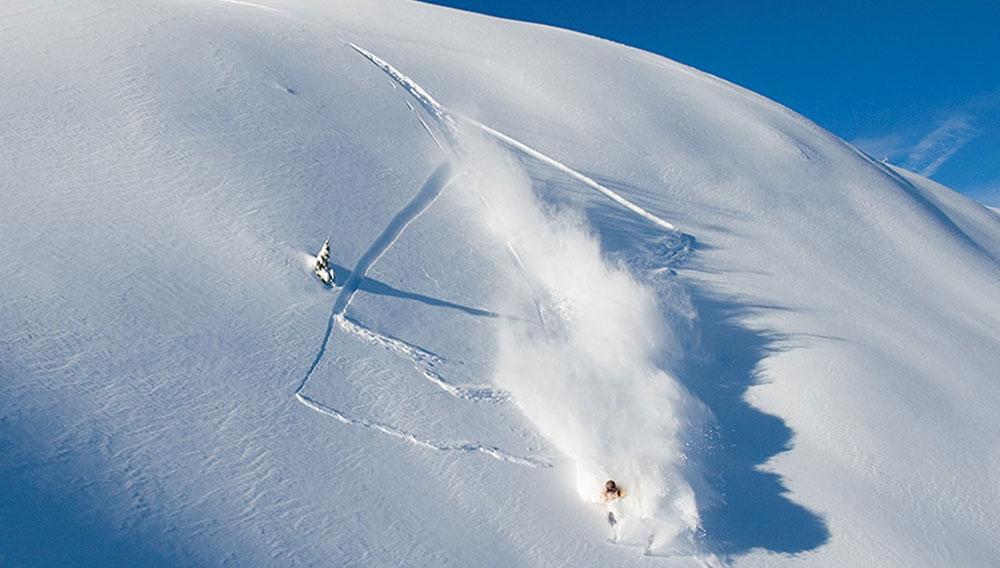 Size is based on the destructive potential of avalanches.

SMALL avalanches are relatively harmless to people unless they push you into a terrain trap.

LARGE avalanches could bury, injure or kill a person.

HISTORIC avalanches are even more destructive, and nearing the maximum size the slope could produce.

The video below does a good job of putting everything together into the bigger picture. Understanding the nuance of where these different avalanche problems live in terrain on any given day takes lots of practice. Take an Avalanche Course to learn more about avalanches and how to avoid them.